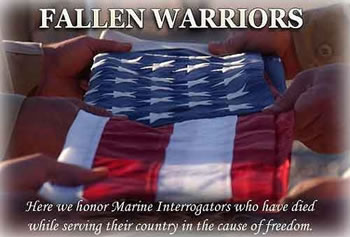 “Words are even more feeble on Memorial Day, for the sight before us is that of a strong and good nation that stands in silence and remembers those who were loved and who, in return, loved their countrymen enough to die for them.”

To those brave Marines who “foremost fighting fell”

Memorial Day originally called Decoration Day, is a day of remembrance for those who have died in our nation's service. We the members of MCITTA again remember our duty to our fallen brethren and commemorate their sacrifice.  Memorial Day is not about division. It is about reconciliation; it is about coming together to honor those who gave their all. Many Americans nowadays have forgotten the meaning and traditions of Memorial Day. At many cemeteries, the graves of the fallen are increasingly ignored, neglected. Most people no longer remember the proper flag etiquette for the day. Some people think the day is for honoring any and all dead, and not just those fallen in service to our country. From the Military Times Hall of Valor, 6781 Service Members have fought and died in Operation Enduring Freedom, Operation Iraqi Freedom and Operation New Dawn as of May 2014. Therefore, we Marines wherever we celebrate should make the effort to fly our flag, sing our Hymn and especially attend a local parade or visit a gravesite near our home and pause for a moment to honor our MCITTA and Marine fallen, brethren. We will never allow any fallen Marine for even a picosecond to believe that they are “The Forgotten Ones.”

Semper Fidelis
Vince Burdelski
Chairman of the Board

Known members of MCITTA who have passed away